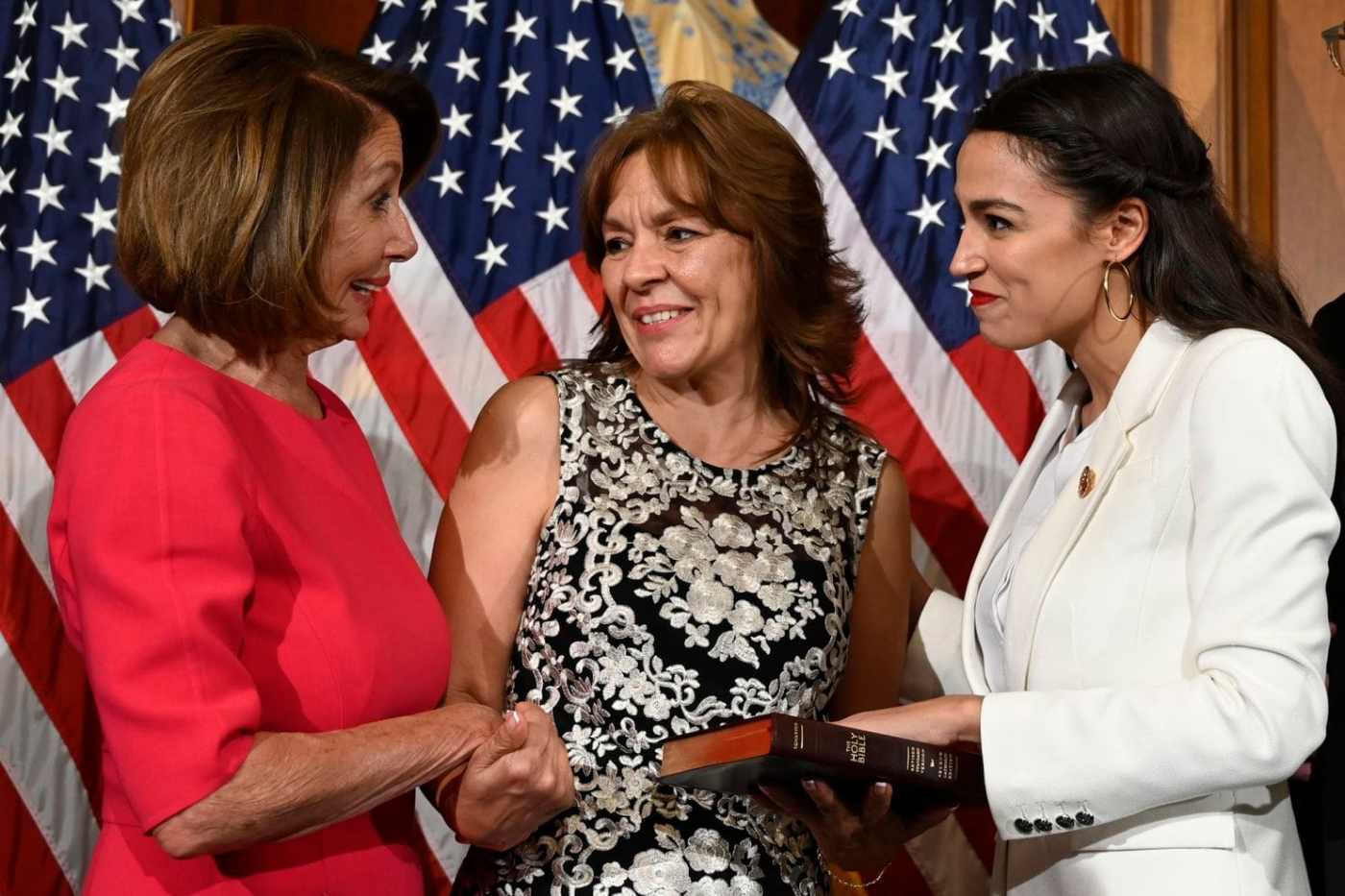 The Washington Post recently ran a photo of Alexandria Ocasio-Cortez which calls to mind one of the texts appointed for this week by the Revised Common Lectionary. Both the photo and the text depict an incorporation of sorts, one party melding into another, and both involve the transfer of power, but one of them makes you wonder where the power really lies.

In the photo, Ocasio-Cortez is reciting the oath of her new office, with one hand on her mother and the other on the Bible. Both mother and daughter are looking at Nancy Pelosi and smiling, daughter’s smile etched upon the firm, unmitigated flesh of youth, mother’s smile floating on flesh that appears to be padded, or loosened by the need to wait and see.

In the text, Peter and John hear that the people of Samaria have accepted the word of God but have not yet received the Spirit, so they set out to deliver it to those people, whom they used to despise for intermarrying with Assyrian conquerors. Perhaps they still despise them. Perhaps the physical markers of Assyrian blood are still discernible in the eyes and skin of those Samaritans, but only if you look for them, which Peter and John have been disqualified from doing by their commission.

Puerto Rican blood is still discernible in Alexandria Ocasio-Cortez — her skin, her eyes, her hair — but time has diluted those markers in her mother. In fact, physical markers would link the elder Ocasio-Cortez more closely with Nancy Pelosi than with her daughter: their hair is the same beautician-recommended color, an effective gray concealer, and their skin the same time-loosened garment. Does the younger woman notice the resemblance? Probably not: her hopes are still as high as everybody’s hopes should be.

The new young congresswoman is required to lay her hand on the book that contains the story of Peter and John laying their hands upon those Samaritans, and thus infusing them with something they had lacked. The congressional ritual is meant to represent a similar infusion, Nancy Pelosi delivering the governing spirit to a woman who used to be governed, but it isn’t clear who has the power in the picture.

If Pelosi is doing something like what John and Peter did, then Ocasio-Cortez has received the word already — from her neighbors, who sent her forward in the place of a man like Pelosi. What world becomes real, as Christian Wiman wonders, when the woman who already has the word lays her hand upon the book that tells the story of the spirit?

Maybe it’s a world in which the direction of infusion is reversed. Perhaps the younger woman’s smile is the marker of an addendum to the oath of office, perhaps an utterance like this: “I pledge to either live the life this book describes or lay my hand on something else.”  That would explain why the younger woman is leaning in, and why the older woman looks surprised.

As the 116th US Congress begins, let’s call upon every member, young and old, to take that kind of pledge.

(Lectionary readings for this week are here.)

Hope, Humour, and Other Eschatological Goodies

Who are you, O God, that you should tell me to walk toward myself, and who am I that I should be walked toward?